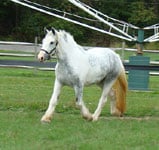 Thistle is a three year old, registered Drum Horse filly. She is out of two registered imported Drum Horses (DNA on file), with known lineage. (Half Sister to Champion Drum stallion, Killian’s Irish Red and a full sister to Doubletake.) Her sire, Chew Mill Guinness,

was the first Drum Horse brought into the country and is shown nationwide. He is out of Galway Warrior, said to once be owned by the Queen of England. Her dam, Blue Bell, is descendant from a mare named Juniper and a stallion named Duke, who were owned

by the Queen of England.

She is up to date on all vaccines, negative coggins, loads, clips, etc… Gets along well with other horses.

Thistle is very level headed but, forward, sensitive to leg commands and has a soft responsive mouth.

Her movement is fluid and she reaches out well from her shoulder and has very nice propulsion from behind. She will do well in the show ring.

Training: Leads, loads and trailers, ties, stand for the farrier, lunges, trained on the hot walker. Started lightly under saddle as a late two year old.

Credits: Lineage on Dam’s side can be traced to the Queen of England. Sire, Guinness was the first Drum Horse in the country.

See this horse in person: At Old Mill Farm!