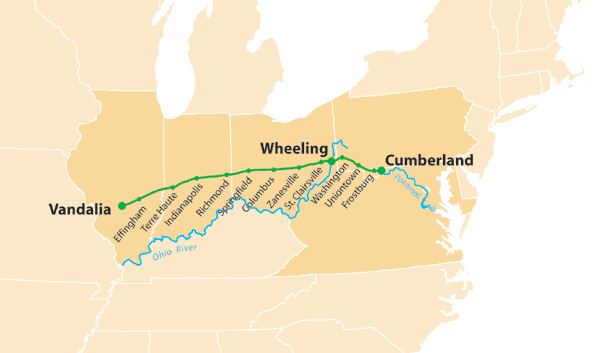 The National Road (Rt 40), which extends about 90 miles through PA, was designated a Historical Civil Landmark in 1976. Construction on the National Road began in 1811 and was completed in 1818 from Cumberland MD to Wheeling, WV, which at the time was still Virginia! The National Rd was the first Federally funded, multi-state project in US history! This road became on eof the major corridors of the Western Migration!

Much of the historic remains still exists along this route! The Mount Summit Inn, Gorly’s Lake Resort (which is now a Bruderhauf Community), The Rush House and The Historic Stone House Restauraunt.

The National Pike Wagon Train recreates the Western movement! Old Mill Farm’s participation marked a smaller historical acheivement…The first Gypsy Horse to participate on the Wagon Train, and so far the only one!