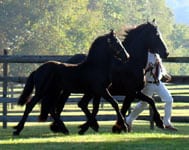 *Realizing that we can not support three breeds by being active in each, we have decided to offer Zima for sale. $14,000.00

Zima received from FHANA, a 2nd Premium at The Iron Springs Farm Keuring on October 2nd, 2007! There were only a handful of fillies that did better than 3rd and several that did not get a premium at all. We are so proud of her and must thank the Griffen’s who handled them!

* Teade, her sire, was approved on Offspring by the FPS in December of 2006. The only US stallion Approved at that testing. He has also received 1st Premium at every Keuring since 2001 (as a three year old) See more of Teade here.